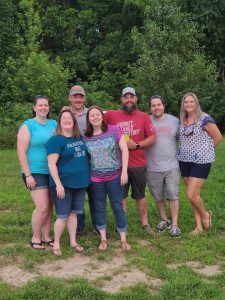 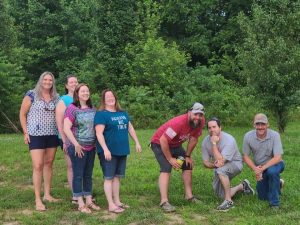 The class 2001 recently gathered for their 20th reunion. Seven of the twelve alumni joined the celebration, which was held at the home of Marcie Mann. Marcie Mann said, “We reminisced and reconnected; many of us having not seen each other in many years. Joseph Onorati joined us briefly by video chat, from Canada.” She added, “Our 14 kids had as much fun as we did.” In the “formal” picture (left to right): Angela Marable, Marcie Mann, Duane Hudson, Kimberly Royall, Jonathan Pemberton, Tom Duncan and Jennifer Garza. In the second picture, “I just don’t even know what the guys were doing. We were supposed to recreate our prom picture, which definitely didn’t look like that,” said Marcie.