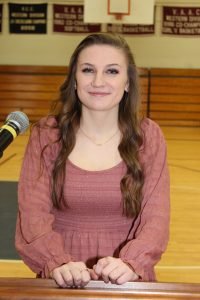 The Chapel Talk marks a significant milestone of senior year at Amelia Academy. Each senior presents a speech to the community about an aspect of their life experience thus far. A requirement for graduation since 2008, the Chapel Talk creates a personal legacy for members of the senior class.

Emma Allen presented the first Chapel Talk this year on January 26 in the Academy gymnasium. In attendance were the senior class and her family, including her parents, Karen and Victor Allen, and siblings, Wavel, Wilbert, Calvin, and Rupert, her nephew Castin and friend Ryan Anderson. The speech was live streamed for the community due to ongoing COVID-19 protocols.

Emma spoke about the people and places that represent home in her life. “The Academy is like home to me because of the many friends, including teachers, I’ve made over the years,” she said. Emma included teachers in her group of friends, especially the late Walter Duncan, her beloved third grade teacher. “He was one of a kind,” she said, “and I sure do miss him.” She credited Mrs. Trudy Arbitelle for her help in math, and Mrs. Angela Anderson for her support in athletics. “[She] is always there when I need to talk,” she added.

Emma recognized several friends who have impacted her life through her years at the Academy. “My friends have always been there for me,” she said. Ryan Anderson is her best friend, she said. She spoke about his work ethic as an inspiration. “Ryan is one of the sweetest, most hardworking people . . . I am thankful for the impact he has made on my life,” she said.

Two other friends–Sarah Reynolds and Madison Borum–have also played a significant role in her life. Sarah has been her friend since kindergarten, and they will carry many memories of their friendship. Along with Sarah, she and Madison have shared sports and many good times.

Emma’s life at home with her family includes friendships with her nine siblings. Admitting that life in a large family can be chaotic at times, Emma said, “they are my family, and I love them all.”

Tragedy affected her family in October, 2020, when her brother Wilbert was in a car accident. The news that he had been med-flighted from the accident scene was overwhelming. The family rallied together and, “as time went on, Wilbert healed and got better,” Emma said. “When I look at him, I see a walking miracle.”

Her parents have been the primary influence on her life. Her dad taught her that success would come from hard work.  “[He] would take me to the farm with him and show me the value of work, whether it was cutting hay, fixing fences, or catching cows,” she said. Her mom has “always known how to lift me up when something is wrong.” Both parents have helped her realize that she should never give up on her goals.

In conclusion, Emma shared an anonymous quote about home. “Having somewhere to go is home; having someone to love is family; having both is a blessing.” She said that she has been fortunate to have the blessing of both in her life. She expressed appreciation to her family and friends for their support and for “always pushing me to keep going.”

Emma plans to attend Southside Virginia Community College next fall to pursue a degree in nursing.