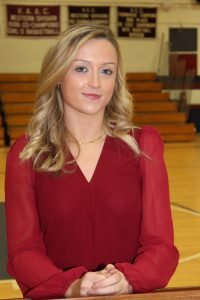 Change is an inescapable part of everyone’s life, especially high school seniors. However, growth as a result of change is a choice, said Madison Borum in her Chapel Talk, delivered on February 2 at Amelia Academy. She credits people in her life for supporting her through all the changes throughout her life thus far.

“Growth is trying new things in life and not being afraid of the word change,” Madison said. “I used to settle for less and do the bare minimum,” she said. Although she maintained good grades, she didn’t focus as much on becoming involved in school programs. Then, she decided to take a more active role. This year, she was elected as president of the Student Government Organization by her fellow students and was selected by her peers as class president.

Every new venture has not been successful. “I have done things out of my comfort zone and failed,” Madison said. “But, it is okay to fail. . . it makes you a better person.”

Since middle school, Madison has participated in sports at the Academy, playing volleyball, basketball, and softball at both the junior varsity and varsity levels. During her eighth grade year, Madison met the challenge of playing varsity volleyball. “I didn’t really know anyone . . . but Coach [Jason] Morris made it clear that I was there for a reason,” she said. Under his direction, Madison said she developed a passion for the sport, something she wouldn’t have had without his support.

Madison has also relied on a support system that includes her family, along with her Amelia Academy teachers and friends. Her family includes her brothers, Joseph and Levi, who “have always been there for me and supported me through the years.”

Her mother, Stephanie Borum, has offered guidance and support. “She pushes me in my academics and . . . guides me in the right direction,” Madison said. By doing her best Madison said she demonstrates gratitude for her support.

Through her years of playing sports, her father, Mark Borum, has been a constant presence. “My dad is the one that always pushed me in athletics,” she said. “He tries to attend all the games he can, and he even coaches me in softball, which I am very thankful for,” she said. Admitting that she sometimes could not understand his focus on improving, she now realizes that “it made me work harder and made me a better person,”

Her friends have been with her through good times and challenging moments. She has developed friendships with those who are “kind and good at heart.” And, they always make each other laugh the hardest. Three of those friends are Amanda Carwile, Emma Allen, and Sarah Reynolds. They have created memories throughout the years, and Madison has learned the “importance of surrounding yourself with good people.”

Madison has excelled in both academic and athletic pursuits as a student at the Academy. She is a member of the National Honor Society and has served in leadership positions. She has been captain of her volleyball, basketball, and softball teams, and she has earned multiple accolades for volleyball in the Virginia Colonial Conference.