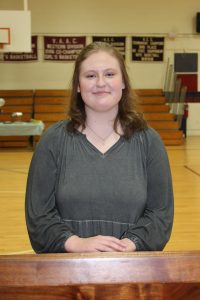 “If you try and keep a positive attitude, with the support of your family and friends, you can get through anything,” said Sarah Reynolds in her Chapel Talk, delivered virtually at Amelia Academy on March 2. She paid tribute to the people in her life who have been her support system through good and difficult times.

A student at Amelia Academy since pre-kindergarten, Sarah said that “[Amelia Academy] has made me who I am today.” Over the years, she has faced challenges and celebrated success. However, her friends have been a mainstay no matter what was happening.

Sarah has played sports at the Academy since middle school. She noted that she once considered games lost as failure. She also tended to blame herself for the loss. “One of the many things I’ve learned,” she said, “is that it’s not all about winning; it’s more about going through the ups and downs together and coming out as one.”

She and her teammates have had a lot of fun along the way. One of Sarah’s favorite memories came after a winning volleyball game. “The team all pitched in and got me my very own cheesecake,” she said.

Sarah emphasized the importance of lessons learned in the Academy classrooms. “One of the biggest influences at Amelia Academy has been Mr. Womack,” she said. Marshall Womack joined the Academy faculty this year after many years of teaching at Fuqua School and a career in banking. “He has taught me that life is not fair but, if you work hard for your dream, you can achieve it,” she said.

Several friends have been with her since their years in lower school. Two of those friends, Emma Allen and Madison Borum, have been there through every moment, including antics such as cutting each other’s hair in third grade. In Middle School, her friend Olivia Sharp joined the class. Now, they are going to be roommates in college next year.

More recently, her friends Macy Barnard and Breyana Ellett have become a part of her support system. “I have only known them for around two years . .  but they have stayed by me .  . and it feels as if we have known each other forever,” she said.

Sarah said that her mom remains her best friend. “I have always counted on her for everything that has happened in my life,” she said. “I know I can alway trust her with anything and am truly blessed to have her as a great mom and better friend.”

Sarah also includes her brother and dad among her closest friends. “He [her brother] will always be able to help me because he is one of the only people who knows me better than I know myself,” she said. Sarah said that her dad is “one of the strongest people I have ever known” and “has shown me the true meaning of family.”

Sarah’s friends and family helped her during her grief when her Papa passed away during the summer before her junior year. “When this happened,” she said, “I knew I wouldn’t have to go through it alone.

Sarah encouraged her fellow students to realize that they can overcome the challenges they will face. She reassured them that “there will always be someone there for you. . . you will never have to go through it alone.” Ih the coming years, Sarah said she hopes to be remembered as the person who helped others as a friend.

As a student, Sarah has been a leader among her peers. She is vice president of the Student Government Organization and has served as her class president. Sarah is a member of the National Honor Society and the Academy’s scholastic bowl team. As a student-athlete, Sarah has played volleyball, basketball, and softball at both the junior varsity and varsity levels.

In attendance for her chapel talk were her parents, Sherry and Donald Reynolds, along with her brother Noah. Other special guests included her grandparents Linda and Butch Jackson, grandmother Mary Carter and great-uncle Steve Carmichael.