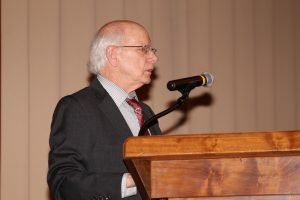 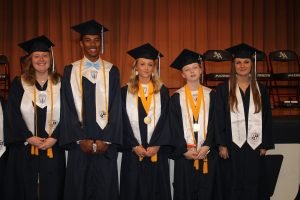 The Amelia Academy Commencement Ceremony was held on Thursday, May 26. Joe Ben Hoyle, Associate Professor of Accounting at the University of Richmond, was the guest speaker. Dr. Ronald E. Wyatt, Jr., pastor of Graceland Baptist Church in Powhatan, delivered the Invocation and Benediction.

The valedictorian of the Class of 2022, Trinity Jade Nunnally, was presented a medallion and a certificate before delivering her address.

Salutatorian of the Class of 2021, Madison Ann Borum, was presented a medallion and a certificate before delivering her address.

Recipients of the Sportsmanship Award for showing fine sportsmanship in high school life by willingness to participate, character, and cheerfulness in the face of

The American Legion Patriotism Award is presented to a senior or seniors who exhibit the principles of courage, honor, leadership, patriotism, scholarship, and service.

The recipients were Madison Ann Borum and Sarah Catherine Reynolds.

The Herff Jones Award, the highest award presented at graduation to a senior who exhibits the qualities of scholarship, leadership, citizenship, and sportsmanship, was presented to Trinity Jade Nunnally.

The Linda E. Duncan Memorial Scholarship, given in memory of Linda E. Duncan, the Academy’s beloved guidance counselor who passed away in 2015, was presented to Madison Ann Borum.

The Virginia Lee Courter Memorial Scholarship, given in memory of Mrs. Courter who taught at the Academy for 27 years,  was presented to Trinity Jade Nunnally.

The VFW Post 8759 Scholarship was awarded to Madison Ann Borum.

The Delbert D. Lynn Scholarship, given in memory of Mr. Lynn’s service and devotion to the Academy,  was presented to Sarah Catherine Reynolds.

The Leland and Henrietta Bass Memorial Scholarship, given by Paula Bass in memory of her parents and to recognize their hard work and support for her college education. The recipients of the two scholarships were Quinton Franklin Dagner and Trinity Jade Nunnally.

The High Bridge Camp #1581 of the Sons of Confederate Veterans Scholarship was presented to Sarah Catherine Reynolds and Madison Ann Borum.

The seniors were then presented their diplomas by Mr. Kelly Anderson, President of the Board of Directors of Amelia Educational Foundation, assisted by Mr. Rodney Taylor, Head of School, and Mrs. Jennifer Faeth, senior sponsor.